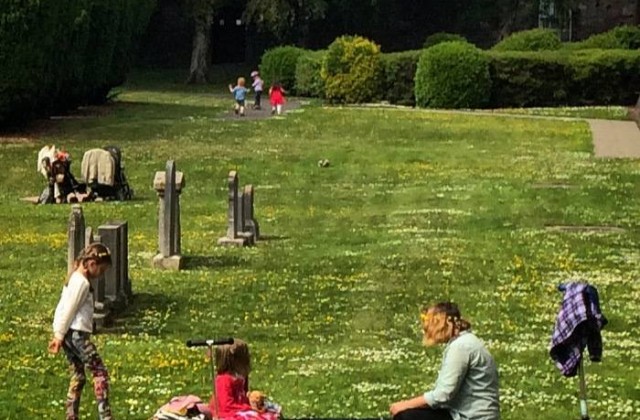 Is there an alternative to Round Up? Many countries think there is, including France, the Netherlands, Denmark, Sweden, Russia, Brazil, Mexico and Sri Lanka who have banned or restricted it’s use due to escalating health concerns. A recent World Health Organisation report states that Glyphosate (the active ingredient in Round Up) is a ‘probably carcinogenic.’

The name ‘Weed’ is only a label, like ‘Blow In.’ Some of the most vigorous (of what we have come to call) weeds, dandelions and Ivy for example, are vital for bees because of the time of year they flower (early spring and autumn when flowers/pollen are scarce) and their flowering characteristics (dandelions close in the dark and the rain to protect their pollen). The  Sitric Compost Garden has become a sanctuary for bees, including Osmia Bicornus, the red mining bee, who is 100+ times more efficient than the honey bee as a pollinator. As a result we have an abundant crop of nectarines and peaches thriving the garden’s microclimate this year,  extremely unusual for Ireland! 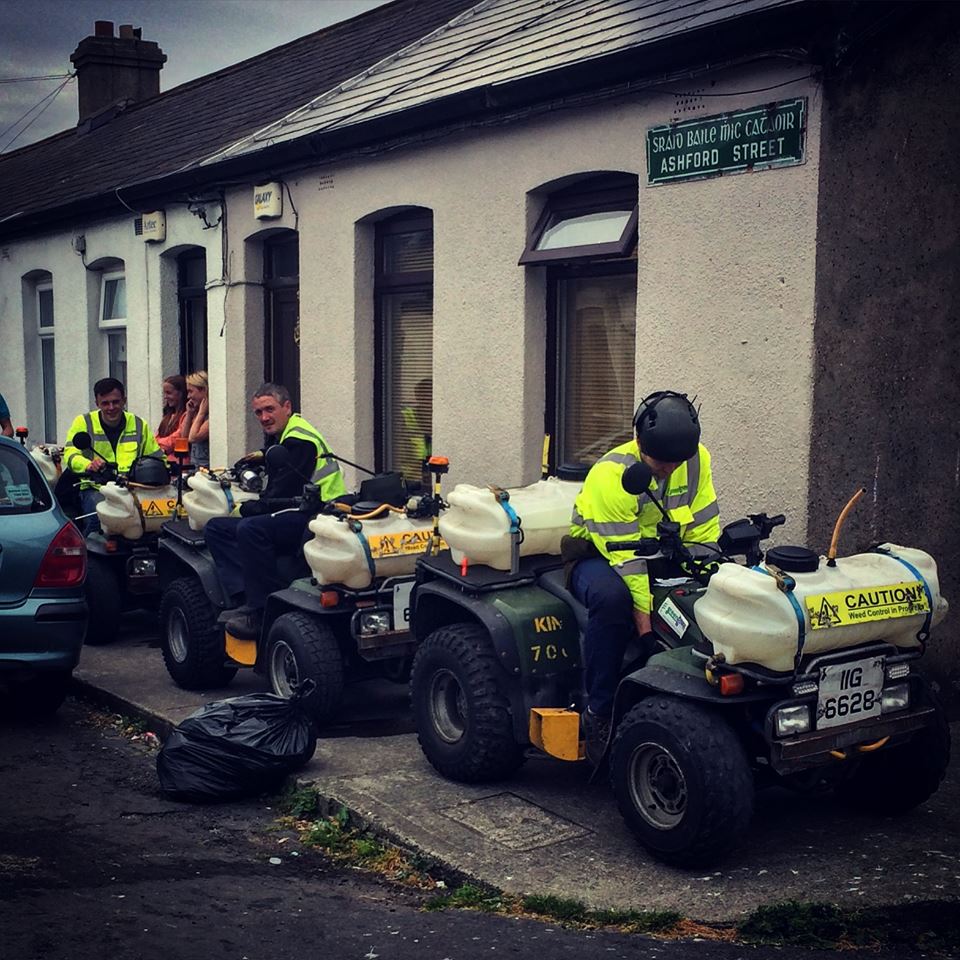 Greentown Environmental quads spraying the footpath in Stoneybatter with Round Up. We are concerned that they were not wearing masks or gloves and were unaware of the new information that is emerging about this herbicide, as were the residents in the houses adjacent.

It is not only the decline in bees and biodiversity we should be considering. Stoneybatter is now a haven for young families who’s small children learn to walk, and play on our streets. Similar to our local pets, they do not think discriminately about what they put in their mouths. When DCC spray the weeds in our neighbourhood gutters they do not remove them. This organic matter breaks down on the street and fertilises the more tenacious weeds which quickly return. I suspect that this expensive and toxic solution to what some consider ‘untidiness’ is contributing to our weed problem in the long term. 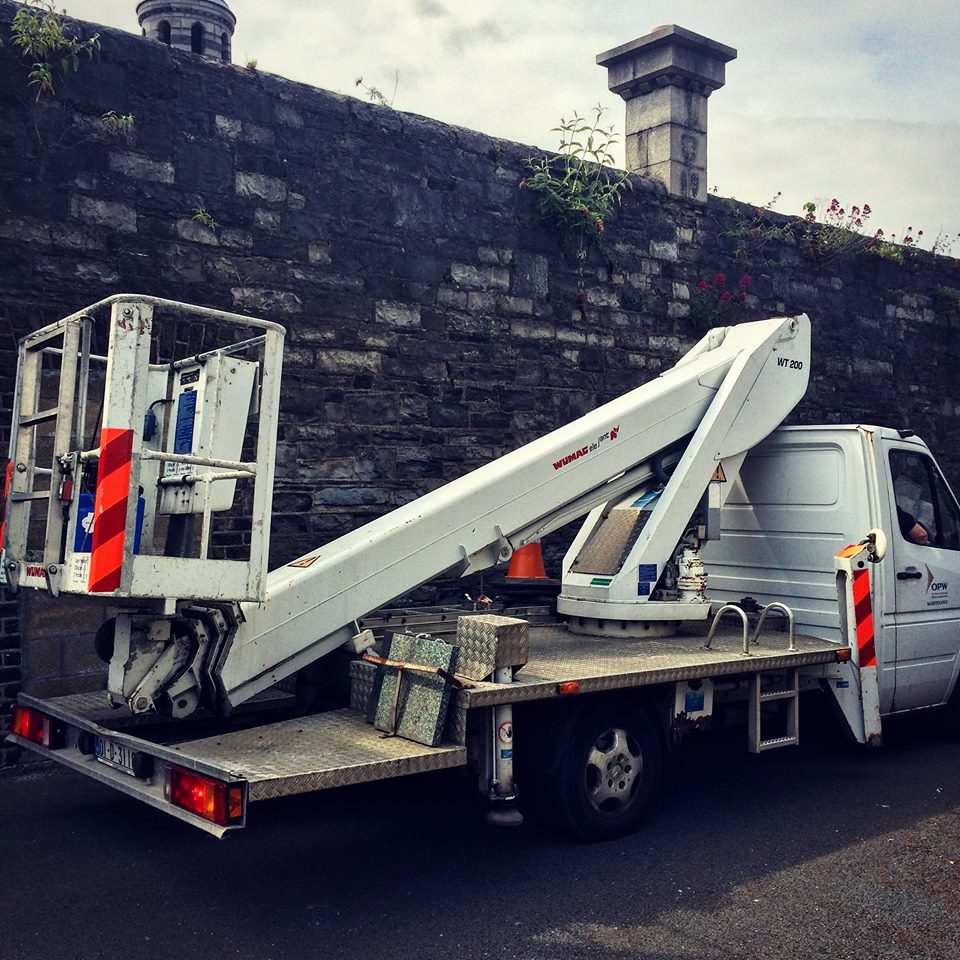 OPW truck about to spray the outside walls of Arbour Hill Memorial. The photo featured at the top of this page shows the families with small children, including a 2 week old baby, who were celebrating a rare sunny day on the other side of that wall. 16.06.15

Untidiness, similar to Beauty, is in the eye of the beholder. I would rather see living plants than dead ones on my street and favour a strategy that would eliminate the use of chemicals. I have cleared my own patch (and feel most residents would do so) if this would keep our streets safe for children, pets and wildlife. Even the Irish Tidy Towns Competition Ireland, gatekeeper of the term, has been rethinking it’s standards in recent years to embrace habitats that attract and sustain wildlife.

This budget aimed at keeping our streets clean is a knee jerk reaction to a problem that deserves informed consideration. During a period of staff shortages this money would be far more effectively spent on clearing the illegal dumping that plagues our streets. ‘Weeds’ are not a health hazard (until sprayed), bags, oozing used nappies, dog excrement and rotting food that attract vermin, most certainly are! 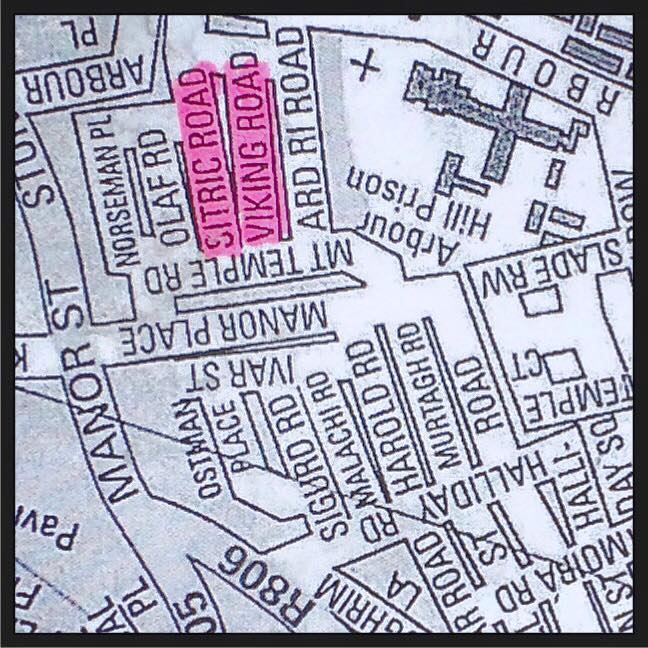 This is the spraying map that Greentown Environmental, contracted by Dublin City Council, was given for our area. The pink area indicates that they are not to spray Sitric or Viking Road or the area surrounding the Sitric Compost Community garden. You can also call John McPartlan, Public Realm Officer, Dublin City Council: 01 222 5303, to request that your area be deemed a ‘no spray zone.’ 16.06.15

A recent Guardian article, Glyphosate is a ‘probably carcinogenic’ pesticide. Why do cities still use it?, documents conversations that are taking place in UK cities about this issue and alternative strategies they are putting in place. Ireland has one of the highest rates of Cancer in the world, just under the USA.  When I first moved to Ireland in 1976 DDT and Paraquat, already outlawed in the US, were still in common use in Ireland. How times have changed!

In light of  the new evidence that is emerging surrounding Glyphosate’s potential dangers and our status as Green Ambassadors leading an international campaign for “a new model of future-thinking agriculture,”can we afford not to consider alternative strategies for weed control on our streets and in our fields?

If you live in Dublin and would like to declare your a ‘no spray’ zone, or simply discuss your concerns regarding the use of Glyphosate on our streets, call John McPartlan, Dublin City Council Public Realm Officer at 01 2225303.

Addendum: For a humorous but informative romp through the subject view the recent Undercurrent/Guardian video ‘Why are we being fed by a poison expert?’ and the follow up article  responding to the comments it spawned.

One Comment on “The Sun Shines and Dublin City Sprays (chemicals)”