Poverty below the Highline 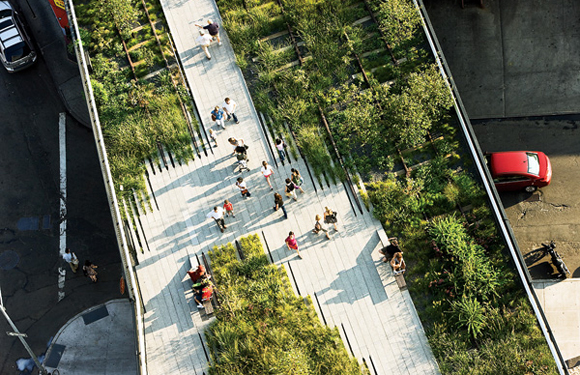 Of all the factors that contribute to urban livability — including public health, education and infrastructure — policy is often focused disproportionately on economic growth. In pursuit of this assumed prerequisite for prosperity, municipal governments around the world are investing in urban design. At the same time, this investment is fueling inequality and displacement. The allocation of public funds to places of high economic potential favors the rich, creating an unfair playing field for all tax-payers. One of the most striking examples of this trend is the High Line in New York City.

Built on an elevated former railway, the High Line park runs 1.45 miles along Manhattan’s West Side. Since the 1990s, the surrounding neighborhoods have changed from a downtrodden post-industrial area to a hot spot in the city’s social and cultural scenes. They’re now home to many bars, galleries, restaurants and shops like Barneys, Alexander McQueen and Stella McCartney. Past neglect created the conditions for profitable redevelopment, as evident in “Alphabet City” and many other Manhattan districts over the past 20 years.

Since its opening in 2009, the High Line has been hailed as an inspiring use of architecture for urban renewal. It has a large fan-base, including the municipal government. In fact, the High Line has thrived “within the confines of the community of money” because of strong government support. The first two installments cost a reported $152.3 million, and the third is projected to cost $86.2 million. Funding sources comprise $112 million from the city government, $20.3 million from the federal government, $400,000 from the state and $44 million from private donations. Operating costs are estimated at $2-4 million per year. With over half the High Line’s budget coming from public funds, concerns over the return on this investment are more than justified.

Government investment in the High Line has created problems for longtime residents who can’t afford the increasing cost of living. According to the American Community Survey (ACS) conducted by the U.S. Census Bureau, there were 15,000-25,000 people living in poverty in the neighborhoods around the abandoned railway in 2005. More recent census data shows that the poverty rate in New York City rose for the third straight year in 2011, representing 20.9 percent of the total population. For a single person, this means earning less than $11,500 a year; for a family, less than $23,021. These numbers are especially alarming because the average rent for a one-bedroom apartment around the High Line when it opened was already over $1,200 a month. It’s possible that poverty rates have dropped since then as low-income residents are priced out of the neighborhoods. This raises important questions as to who is actually benefiting from the city’s investment.

The High Line has been a catalyst for gentrification that, according to Neil Smith, “is no longer about a narrow and quixotic oddity in the housing market but has become the leading residential edge of a much larger endeavor: the class remake of the central urban landscape.” The project exudes a “cool” image of feigned neglect, despite the troubling irony in this aesthetic. Commodifying ostensibly lower-class spaces for supposedly higher classes is both patronizing and divisive. Liz Diller, one of the lead architects for the High Line, joked that “the great success [of the project] has been introducing New Yorkers to doing nothing.” This comment rests on a key oversight: Not everyone earns enough from their work to afford even a few hours of “doing nothing” at the High Line. And would crowds of people without disposable income be welcome in a neighborhood increasingly structured around spending money? Some experience a sense of not belonging there, as one visitor remarked: “I felt like I was in the home of a neatnik with expensive tastes, afraid I would soil the furnishings.”

Mayor Michael Bloomberg, one of the High Line’s most steadfast supporters, proposed cutting $170 million in funding from childcare services in the city. This would make life much harder for low-income parents who rely on these programs to get by. In weighing the value of playgrounds for well-off New Yorkers and tourists versus assistance for people struggling to afford food and rent, the mayor appears to favor of the former.

As disproportionate public investment in real estate development becomes the norm, low-income residents are finding it more and more difficult to escape poverty. Reversing this misappropriation of funds would allow us all to build more vibrant neighborhoods than the High Line’s designers could ever have imagined.

Sahra Mirbabaee is a student in the Urban Studies Program at U.C. Berkeley.